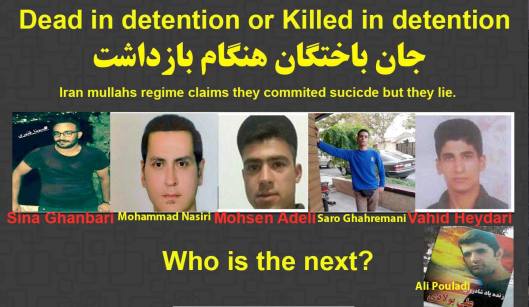 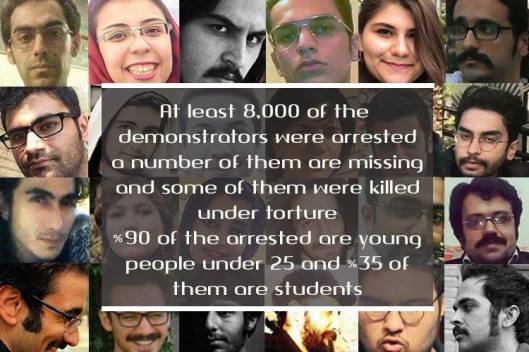 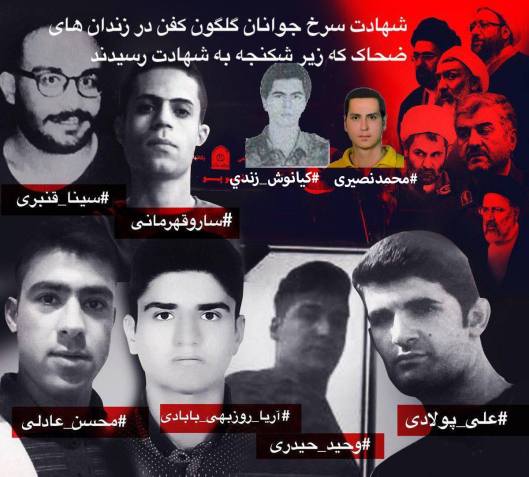 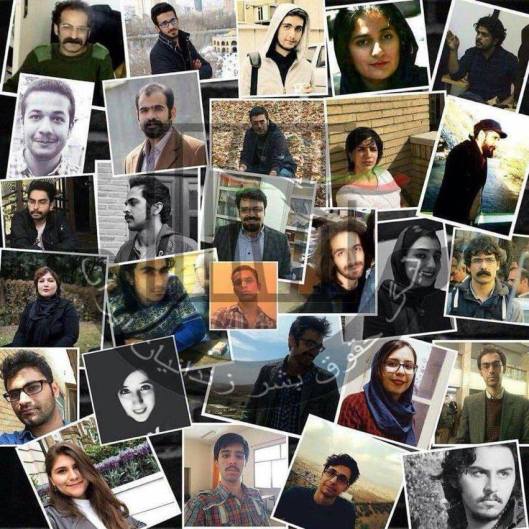 Detainees disappeared
Families of a number of detained protesters have not been able to obtain any information about their loved ones. Among them are Ashkan Absavaran, a 20-year-old male detainee, and Sepideh Farhan (Farahabadi), a young female. Ashkan Absavaran informed his family of his detention in a telephone call on 4 January. Officials of Evin prison told his family later that he had disappeared.

The IRGC and its affiliated paramilitary force, the Basij, have been mainly responsible for the heavy crackdown on the protesters. Having initially denied direct involvement in repressing the protesters, the IRGC commander declared on 3 January that they had taken action in three provinces. Furthermore, the IRGC has been responsible for torturing the detainees in order to make false confessions in Wards 2A and 240 of Evin prison.

BackChannels has been here before.

Embedded on the post, “On Human Rights Day, Iran is Again Covered in Blood” — Maryam Rajavi, BackChannels readers will find added from 2009 “Iran -References to the Serial Murders and Related — From April 22, 2009” and a listing of the dead titled “Iran — The Mute”.

For how long will Iran’s payoffs for murder continue to be accepted by the patronized of the state?

In one of the above clips, Maryam Rajavi put the number of regime executed political martyrs at above 120,000, with 30,000 killed shortly after the taking of power in 1988.

Children of Iran’s captive south run through the streets chanting “Death to Rouhani” – video date reported from source as January 22, 2018.

Updates from the News Online

NATO calls on Russia to de-escalate tensions in Ukraine – YouTube

PEREVALNE, Ukraine (AP) — Warning that it was “on the brink of disaster,” Ukraine put its military on high alert Sunday and appealed for international help to avoid what it feared was the possibility of a wider invasion by Russia.

Outrage over Russia’s military moves mounted in world capitals, with U.S. Secretary of State John Kerry calling on President Vladimir Putin to pull back from “an incredible act of aggression.”

“This is not a threat: this is actually the declaration of war to my country,” Ukraine’s Prime Minister Arseny Yatseniuk said in English. Yatsenuik heads a pro-Western government that took power when the country’s Russia-backed president, Viktor Yanukovich, was ousted last week.

Of potentially even greater concern are eastern swathes of the country, where most of the ethnic Ukrainians speak Russian as a native language. Those areas saw violent protests on Saturday, with pro-Moscow demonstrators hoisting flags at government buildings and calling for Russia to defend them.

Related (2/28/2014): Crimean crisis: Russia holds most of the power against Ukraine

Meanwhile, NATO Secretary General Anders Fogh Rasmussen said at a press conference that Russia should pull back its forces and refrain from interfering elsewhere in Ukraine, according to Reuters. NATO is urging the two countries to seek a peaceful resolution through dialogue.

Secretary of State John Kerry — who is heading to Kiev on March 4 to meet with representatives of Ukraine’s new government — has called Russia’s military incursion into Ukraine “an incredible act of aggression” and said Putin has made “a stunning, willful” choice to invade another country.

Related: Secretary of State John Kerry vows visit to Kiev as Russian forces surround Ukraine military base in Crimea – NY Daily News: “A second administration official indicated that the U.S. was not weighing military action to counter Russia’s advances, saying the Obama administration’s efforts were focused on political, economic and diplomatic options. The officials were not authorized to publicly discuss the situation and insisted on anonymity.”

Ukraine, as a whole, is going to move fast.

The Bear regards the old system of buffers as its own, but it has a remarkable failure going in Syria.  That President Vladimir Putin pumped $52 billion into the Winter Olympics at Sochi while pledging $10 million for humanitarian relief in Syria has not gone unnoticed — nor have election shenanigans, the Night Wolves, allegations about “mafia state” and “fragile empire” — and all will reflect poorly on his sense of responsibility to Russians and to others.

However, Ukraine is also a borderland naturally spanning a cultural divide between Europe and Eurasia, between the politics of the now open democracies and their common currency and shared values and a stalwart attempting to build some kind of new Slavic society out of the 19th Century manners of aristocracy, now an energy-fueled oligarchy committed not only to its survival but the survival of Bashar al-Assad and Ayatollah Khamenei, a veritable arc of despotic displays of power.

While Syria has become a battleground squeezing out Syrians as casualties and refugees between despots, Ukraine’s democratic revolutionary opposition to despotism has its feet and spirit planted against the “vertical of power” in Moscow.

As Russian forces seize key objects in Crimea, their objective is not just to create chaos in Ukraine but also to protect kleptocratic rule in Russia itself.

Russia and Ukraine under Yanukovych shared a single form of government – rule by a criminal oligarchy. This is why the anti-criminal revolution that overthrew Ukrainian president Viktor Yanukovych is a precedent that is perfectly applicable to Putin’s Russia. It is also the reason why, from the Russian regime’s point of view, the Ukrainian revolution must be stopped at all costs.

Perhaps the last time the Russian intelligentsia watched the internal struggle in another country this intently was in 1968 during the Prague Spring, when they hoped the Czechs would succeed in building what they called “socialism with a human face”. They also believed it would hold out the promise of something better for life in the Soviet Union. In August 1968, the Soviets invaded Czechoslovakia, quashing the Prague Spring. In Moscow, seven people came out to protest against the invasion; they were arrested and the modern dissident movement was born.

Most Russians believe the Crimea is theirs – Putin has acted on his belief | Masha Gessen | Comment is free | The Observer – 2/1/2014.

“Yes, I could see this one from Alaska. I’m usually not one to Told-Ya-So, but I did, despite my accurate prediction being derided as ‘an extremely far-fetched scenario’ by the ‘high-brow’ Foreign Policy magazine,” Palin wrote in a Facebook post on Friday. Palin was resoundingly mocked by comedians like Tina Fey and eggheads for saying in 2008 that Alaska’s proximity to Russia forced her to deal with foreign policy issues just like George W. Bush said thatTexas’s proximity to Mexico compelled him to deal with Mexico when he was governor of Texas.

On Russian propaganda: StopFake | Fighting untruthful information regarding the events in Ukraine