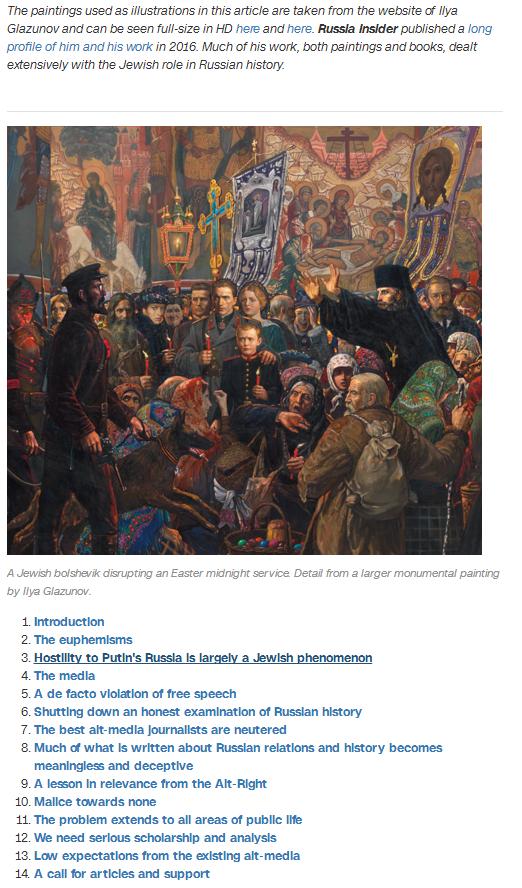 Chosen link for a look-see: “Hostility to Putin’s Russia is largely a Jewish phenomenon”:

Russia Insider’s mission is to explain and describe Russia and her role in the world. As soon as you begin to drill into how other nations relate to Russia, and Russian history, it becomes obvious that the unreasonable hostility towards Putin’s Russia, particularly coming from the US and the UK, is very much a Jewish phenomenon, and has been for centuries.

And yes, ‘Jewish’ is the only term that accurately describes it, and not one of the many euphemisms we frequently see used.

The most vitriolic and obsessive Russia-bashing journalists in the media are mostly Jewish. The publications which push these writers most energetically are ALL Jewish-owned, and as a publisher, I know very well, that is where the buck stops.

BackChannels most respectfully suggests that Colonel President Emperor and Pharaoh Putler — if that is how he wishes to be known — may consider either disassociating his godliness from so cliche and puerile a revanche of the Imperial style in Jew Hate or now let the world know now he endorses it!

A few months ago he bought a number of old books from a former officer of the “Okhrana” (Political Police) who had fled to Constantinople. Among these books was a small volume in French, lacking the title-page, with dimensions of 5½in. by 3¾in. It had been cheaply rebound. On the leather back is printed in Latin capitals the word Joli. The preface, entitled “Simple avertissement,” is dated Geneva, October 15, 1864. The book contains 324 pages, of which numbers 315-322 inclusive follow page 24 in the only copy known to Mr. X, perhaps owing to a mistake when the book was rebound. Both the paper and the type are characteristic of the “sixties and seventies” of the last century. These details are given in the hope that they may lead to the discovery of the title of the book [See Preface]. Mr. X. believes it must be rare, since, had it not been so, the “Protocols” would have speedily been recognized as a plagiarism by anyone who had read the original.

That the latter is a “fake” could not be maintained for an instant by anyone who had seen it. Its original possessor, the old Okhrana officer, did not remember where he obtained it, and attached no importance to it. Mr. X, glancing at it one day, was struck by a resemblance between a passage which had caught his eye and a phrase in the French edition of the “Protocols” (Edition de la Vieille France, 1920, 5, Rue du Préaux-Clercs, 5, Paris 7th Arrondissement). He followed up the clue, and soon realized that the “Protocols” were to a very large extent as much a paraphrase of the Geneva original as the published version of a War Office or Foreign Office telegram is a paraphrase of the ciphered original.

Before receiving the book from Mr. X, I was, as I have said, incredulous. I did not believe that Sergei Nilus’s “Protocols” were authentic; they explained too much by the theory of a vast Jewish conspiracy. Professor Nilus’s account of how they were obtained was too melodramatic to be credible, and it was hard to believe that real “Learned Elders of Sion” would not have produced a more intelligent political scheme than the crude and theatrical subtilties of the Protocols. But I could not have believed, had I not seen, that the writer who supplied Nilus with his originals was a careless and shameless plagiarist.

Related on BackChannels in No Particular Order

StopFake.  “Is Russia Insider sponsored by a Russian oligarch with the ties to the European far right?”  November 23, 2015.

Russia’s Foreign Minister Sergey Lavrov seems unable to separate the good intent shown in producing this overdue course correction from the seeking of advantage yet against Ukraine and the nationalist posture once taken against the Jews.  In fact, the Scheubner-Richter and Hitler relationship tells of a larger Russian history in the generation and dissemination of anti-Semitic libel and myth.  Nonetheless, Lavrov’s stern comments may pave the way for a long overdue pivot westward and away from the crimes against humanity of the Stalin years, the Soviet Era, and, most recently the same delivered with horrific brutality by Assad — as flanked by Putin and Khamenei –to noncombatant Syrians across the course of the civil war.

This site uses Akismet to reduce spam. Learn how your comment data is processed.