The gun men came from the hills, armed with guns and machetes under the cover of an afternoon rain. They split into groups and selected remote areas within walking distances of between 40 and 50 minutes to unleash mayhem on innocent lives.

Before then, they had laid ambush on mourners returning from a funeral service in Kakuruk village and simultaneously raided nearby villages, shooting, stabbing and maiming anyone at sight. Even the youthful and agile were helpless as the scoundrels massacred and soiled the land with tears and blood. Witnesses said the carnage lasted for hours and travellers evacuated their vehicles and fled into the bush.

Last weekend 238 Christians were killed in a number of attacks by militia in Plateau State, a region in the heart of the country.

Campaigners are warning it is just the latest example of “pure genocide” in a country ravaged by religious division.

A joint statement issued by the Christian Association of Nigeria said more than 6,000 Christian worshippers – “mostly children, women and the aged” – had already been killed this year.

Fulani brigades appear to arrive in numbers great enough to surround their targets and destroy them with automatic weapons and petrol.  For Christian defense: nothing — not weapons, which are confiscated by the government to discourage “vigilante actions”, not terrain, which is rugged but short on natural barriers to foot and vehicle assault, not military or police, who are either spread thin and easily confused or disinterested — and that last has become a point in political contention about the sincerity of Nigerian Muslim President Buhari in relation to his commitment to secure the Christian community in Nigeria. 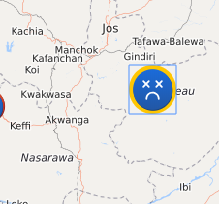 The blue frown refers to the 200 Nigerian recently killed by Fulani raiders in Plateau State.

United States Ambassador in Nigeria, Mr W. Stuart Symington has enjoined both the Nigerian leaders and citizens to make concerted efforts to stop the killings currently ravaging the country. The ambassador was speaking at ceremonies marking the 242 years of Independence for the United States of America.

Symington speaking on the situation in Nigeria said every day, people’s hopes are stopped by unnecessary deaths and by those whose acts reflect no good and served no cause.

President Buhari has urged patience on the part of the Nigerian public:

Once again I sympathize with the people of Benue State, and the families of all those who‘ve lost their lives in these attacks. The security agencies will continue to work to protect all Nigerians. And we will not allow anyone who takes the life of a Nigerian to evade justice. pic.twitter.com/eqKp3YSJoa

Nigeria’s issues with the nomadic Fulani, pressured by drought and motivated some by Islamic supremacist egotism, has been a developing conflict issue in Nigeria for some time.  Herewith a smattering of related reports and news news reports and fair use excerpts from them.

All excerpts are partial (there’s more to be read at the source) and dated either in the address line or short after the URL.

Fulani herdsmen and farmers conflict in Nigeria is a land resource based conflict in north-eastern Nigeria. According to a Human Rights Watch report of December 2013 violence between Fulani herdsmen, farmers and local communities had killed 3,000 people since 2010.

On herdsmen, Adebanjo said he had no trust on the ability of the police to quell the activities of the group as the police hierarchy had already described the killings as communal clashes.

He further lambasted President Buhari over his handling of the killings, stressing that “even when someone in the caliber of Falae was kidnapped, he didn’t utter a word. He has also refused to identify Fulani herdsmen as terrorists.

President Muhammadu Buhari had barely left Plateau State when the attacks were launched on Ganda village of Daffo District in Bokkos Local Government Area and Miango village in Bassa Local Government Area. The communities were attacked few hours after the inauguration of Plateau State Peace Building Agency by the President, who was in Jos, the state capital, on a working visit.

He said: “Twenty-five people lost their lives in a fresh attack on Dundu village of Kwall District of Bassa Local Government Area. The incident occurred just as the Irigwe community had planned a mass burial for four of the five earlier killed in a similar attack on Nzhauvo village.

“When we reacted to a claim by the Miyetti Allah group in January of missing cattle, we told you it was a ploy to justify another round of killings. True to this, the Fulani militia, which the Federal Government has refused to brand a terrorist organisation to the dismay of Nigerians, have continued to visit our villages with orchestrated and unwarranted carnage.

Daily Sun gathered that the attack, which occurred at about 7pm, left several houses burnt and scores injured.

It was learnt that the attackers took the villagers unawares when they were preparing to take their dinner and the entire village was enveloped by gunfire from the attackers, leaving children, women and the aged scampering for safety.

A youth leader, Lawrence Timothy, said 25 corpses have been found, while more were still being recovered from the bush

“Others, including two women are now receiving treatment in a nearby hospital in the community. One girl later died in the hospital, making it 26 victims. This is too bad as we are planning for a mass burial of the last attack. So far, we have more than 500 in Internally Displaced Persons camp. The international organisations should please come to our aid.” 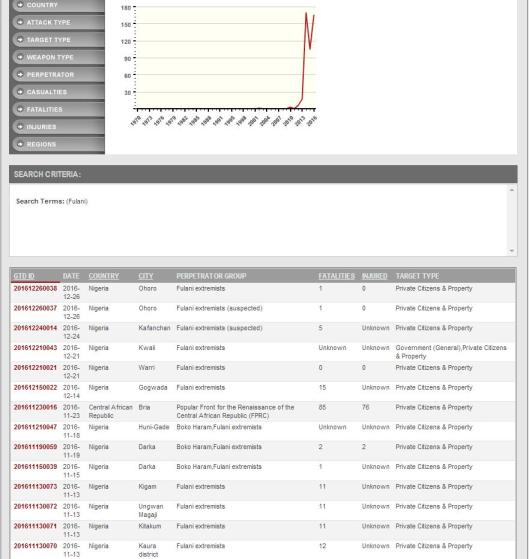 START.  “Annex of Statistical Information: Country Reports on Terrorism 2016.”  Page 12.  National Consortium for the Study of Terrorism and Responses to Terrorism.  July 2017.

In recent weeks, Nigerian security forces have claimed that some groups of semi-nomadic Fulani herdsmen engaged in bitter and bloody conflicts with farmers in several Nigerian states are actually composed of members of Boko Haram. A statement from Nigerian Director of Defense Information Major General Chris Olukolade claimed the potentially dangerous identification came during the interrogation of Fulani herdsmen arrested after a series of killings and arson attacks in Taraba State (Vanguard [Lagos], April 23; Leadership [Abuja], April 24; Nigerian Tribune, April 24). Reports of Boko Haram members (who are mostly members of the Kanuri ethno-cultural group) disguising themselves as Fulani herdsmen while carrying out attacks in rural Nigeria are common. Though many of these reports may be attempts to deflect responsibility from Fulani herders for attacks on sedentary farming communities throughout north and central Nigeria, even the perception that the Fulani herdsmen have joined forces with Boko Haram could propel Nigeria into a new and devastating civil war.

Note: because Russia has been cited as arming the Taliban in Afghanistan in its war against liberal and democratic modernity in that state, BackChannels may suggest searching for similar connection in the “handling” of both Boko Haram and the portion of Fulani Herdsmen engaged in creating chaos, dispossession, and ruin in Nigeria.

It should be evident worldwide that Soviet / post-Soviet Moscow works to weaken states: Syria has been half destroyed in association with Moscow, Crimea invaded and today badgered daily by related military and terrorist-type elements, and so one may ask — or must ask — where else?  And for whose benefit?

For more immediate Nigerian and practical realpolitik, the response to Fulani “softening” for incursion may turn out the state’s army and armed local militia.