The West insists on maintaining the illusion that the government in Baghdad is something other than a Shia sectarian-dominated entity in the process of entering a de facto military alliance with the Iranians. This stubbornness is producing the current absurd situation in which Western air power is being used in support of Shia Islamism.

It is important to understand that this is not taking place because there is no other option for stopping the advance of the Islamic State. There is another, more effective option: direct aid to the Kurds, and to the Sunni tribes further south.

In the medieval mode, sectarian religious teleology — who wins the favor of God?  How soon do we get to find out? — reaches the boundary of the ineffable: may God decide on the field of battle, and the sooner the better!

In the modern mode, the same narrative may be left to God to decide gently across millennia — or not at all: who needs must get to the end of the story in their lifetime or even want the same to arrive in their great grandchildren’s day?

BackChannels has been surprised by the tenacious hold given, so the blog shall refer to it, the “Great Sunni vs Shiite War” in Shiite circles and doubtless, whatever the proportions, in Sunni ones as well.

How is it for the west that so alien, primitive, and singular an unanswerable dispute may by ripples and waves spread to engulf the modern of two to several middle east states?

Ayatollah Khamenei’s expansion of influence, and this despite the regime’s infamous behavior in its own space, appears to proceed apace through the combined artifice of political theater — how conveniently the ISIS story links to the narrative “Assad vs The Terrorists” — and, in Yemen, just watch those Houthis go — war by proxy. 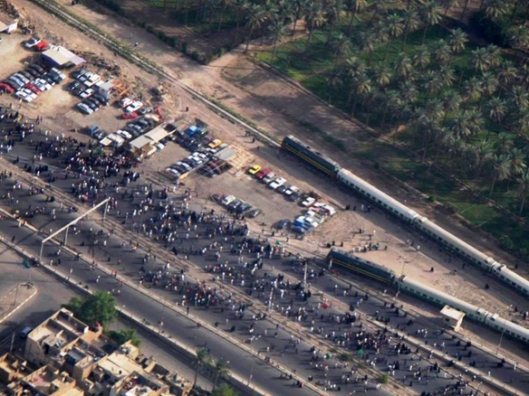 The title of the post: set according to data sent by source, who notes, “they had to close the airport due to the huge numbers that arrived.”

I know it’s hearsay (from my source in Iraq).

I will tell you that the speaker of the Parliament Usama Al-Nujaifi is also the brother of Atheel Al-Nujaifi the Governor of Mosul who didn’t allow the military to get in a few months ago and kept on fighting them and kicked the Federal police (the Shiites from the city) and said we can protect it ourselves , and many more decisions that lead to this and he was the first to flee to Kurdistan

I could tell you a few things about “malignant narcissism”, the “psychology of small differences”, the difference between

but I would have a more difficult time addressing the matter of psychology’s “internal saboteur”.

It appears Atheel Al-Najaifi may have gambled on Sunni-based affinity to maintain Masul and, perhaps by chit-chat, to repulse such as ISIS, but as Mosul melts into ISIS, the same, Sunni or not,  may have lit out for the border.

Where I live, Maryland, USA, Christian Catholic and Protestant colonists had similar decisions to make but may have been more cooperative, eventually, with one another for finding themselves alone on a then European and English frontier with worries about security and markets held in common.  Maryland historian Robert Brugger came to call what the state found within itself a “middle temperament”.

Except in Israel, perhaps Lebanon at the moment, that “middle temperament” seems to be having a hard time surviving n the middle east.

The fascists, secular or religious, dictators or religious warriors, seem to have the more effective armies, and those possessed inherently of a “middle temperament” suffer mightily, endlessly at the onslaughts and impositions of both.

One may hope that Iraq will find its “middle temperament” and that Iraqi Sunni and Shiite adherents (for there is no compulsion in religion — or is there?) find the courage to build and cement the army that represents it.

Perhaps I have made more of the mechanics than is deserved.  In the west, we would couch the same request — defense by local or regional militia — as associated with “local rule” and reasonable autonomy within a greater federal system.

The one thing known to politicos about the al-Qaeda affiliates: they make themselves the controlling agents of others until stopped cold.  They may or may not believe they are the soldiers of God Almighty himself, but (also given the numbers confused about this), they are really the Soldiers About Themselves Experiencing Power Revolving Around Themselves — pretty much the same as any other ordinary dictator.

“Dawn’s obfuscation of the Shia genocide in the aftermath of Mastung massacre”, Let Us Build Pakistan – 2/2/2014.

Syria, The Middle East, Religious War — Analysis by Douglas Murray at The Spectator